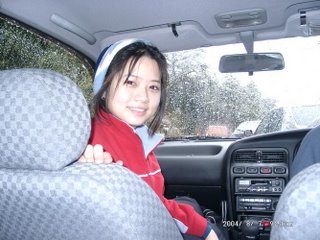 October 6th.
I was driving home from the office, thinking of who I could call for company at dinner when I received an sms. What a surprise!! Bambi Lee is back from New Zealand!... again! And just so happened that she was free for dinner. I was elated to have my quandry solved (about getting dinner company) and to having dinner with an old friend, one whom I can never forget.

This lass, whom I met in secondary high back in SMDU ('Sekolah Menengah Damansara Utama'; the high school we used to go to), has been in NZ for the past 11 years. I will always remember her as the girl who had these funky pair of big blue spectacle frames (similar to Sir Elton John's *grin*), with a pony tail bound by a big blue or white hair band, a very distinct hallmark of Miss Lee here...or so it was... *har har*

By the way.... 'Bambi' or coming from the root noun 'Bambino' means 'little one' or 'child' in Italian. It's also known as a new breed of short, hairless cats....*ha ha ha*

I've been meaning to visit Bam in NZ for the longest time... just never got around going there, which is a point of contention for Miss Lee. If she reads this, she'll probably would comment about my 'promise' to visit since 10 years back or so... Bam, if you're reading this, I'll have you know that I intend to come over and I will make the time next year. As of being 30 years of age, it would be one of my resolutions in life...

We used to be part of an unofficial clique called "the B gang"... (a long story, one which I do not wish to tell now...) . Along the passage of time, I think I see her the most out of all the other members (so to speak) despite the fact she comes back like every once a year. 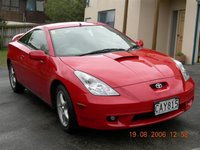 This young lady recently made an acquisition, one which definitely qualifies her as a bona fide speed addict. A Toyota Celica, 2001, 1.8L, 6-speed manual transmission... quite a lot of horses under the hood of car belonging to the last person I'd ever think who'd want to live life on the fast lane....literally... Careful Bambi, with great power under the hood comes great responsibility :) 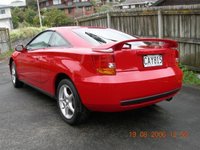 I just returned from having drinks with Bambi, Bok Seong, Lee Ming, Richard Chan and Patrick Lim at Yippee Cup, SS2, PJ, all of whom are Bam's contemporaries and my juniors by a year at SMDU...living their own lives and earning their keep now. Really was quite enjoyable, including the change of venue almost next door's Hong Kong Char Chan Teng in SS2, PJ. I guess my Friday evening was fulfilling...seeing that I started off thinking of having dinner...

Ya know what Bam, it's been really great having to see ya again...one of the few people whom i know who would definitely make my day worthwhile...there's no other substitute than a good dose of laughter, a dash of kindness and a pinch of understanding. All these ingredients make a whole cake of good friendship...one which has left a permanent impression in the pages of my life...thanks for being there Bam...I pray for happiness and blessing for you...

theatres are cool. using airline seats in the theatre would be cooler