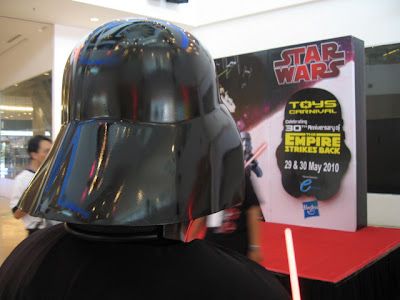 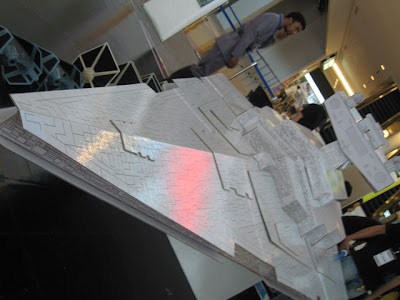 Courtesy of Hasbro Malaysia.
The biggest cardboard Imperial Star Destroyer
ever built in Malaysia. About 12 feet in length and stands about 5 feet tall.
Complete with plating and turbo-lasers! 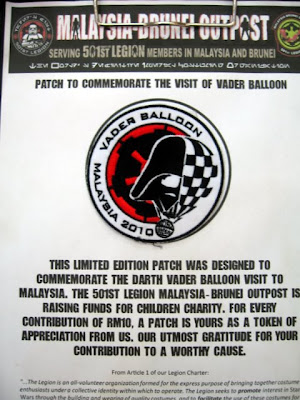 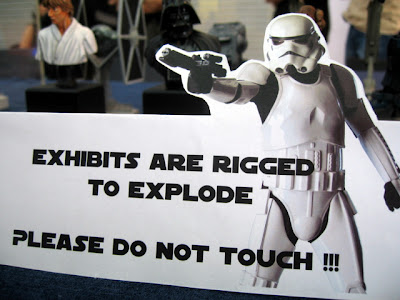 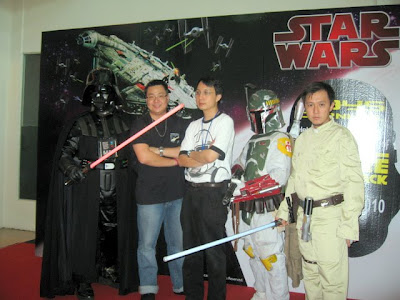 Photo op...me seen with Richard Chua, the organizer of the event

Part of the exhibits by SFTPMS members on display... 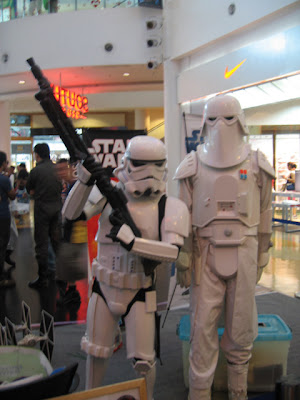 Cosplay by members of 501st Legion 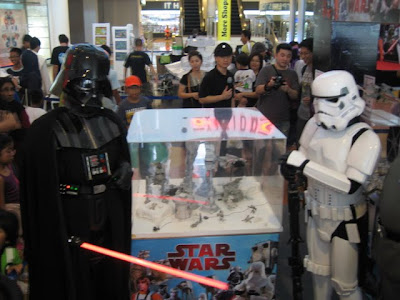 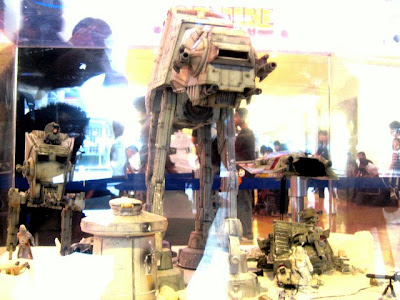 New Star Wars range of toys due to be released August 2010.
Here is a 2-feet tall AT-AT, in scale with Hasbro Star Wars 3 3/4 inch figures. 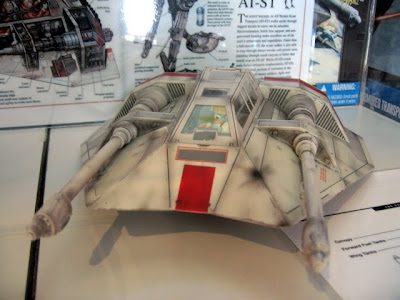 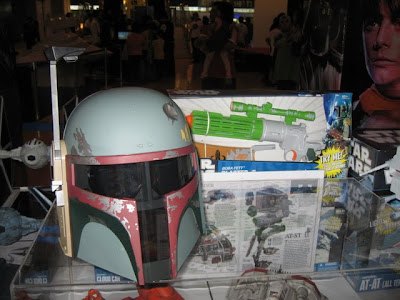 and a new rendition of Boba Fett's helmet
(bigger visor and ventilation at the back so that you don't faint in it)...and the new
Boba Fett blaster just sitting behind...

First ever lightsaber wielding competition...in Malaysia that is... 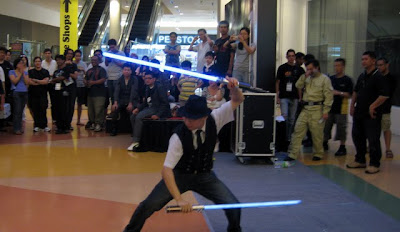 Jedi, Sith, Rebels, Imperials, etc. will be coming together on Saturday 29 May, 2010 at the MySciFiFan Star Wars Fan Party to celebrate the 30th Anniversary of Star Wars Episode V The Empire Strikes Back. Festivities take place at the Preview Lounge of Cathay Cineplex Damansara (e@theCurve) from 8pm until 12am midnight including a Fan Film Screening in the Cinema (from 9.30pm).
There will also be special appearances by the 501st Legion, an international fan-based organisation dedicated to screen-accurate costumes of the various iconic characters from Star Wars. Visitors can expect to see the likes of infamous Darth Vader and Stormtroopers from the local 501st Malaysia-Brunei Outpost. 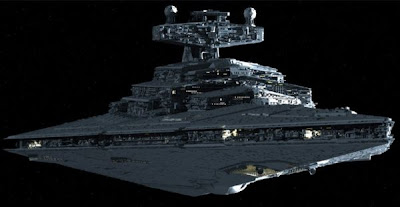 
Hasbro is relaunching Star Wars Starship Battles in 2010 on MEGA-scale! Experience the exciting once again by taking command of starfighter squadrons from the Rebel Alliance or Galactic Empire using 3.75 in series toy vehicles from Hasbro in tactical space combat, this time on the largest floor map to be unveiled in Malaysia. Players will maneuver their starfighters, select targets, and fire weapons in attempt to meet their respective mission objectives. Over Rm4,000 worth of toys to be given away! 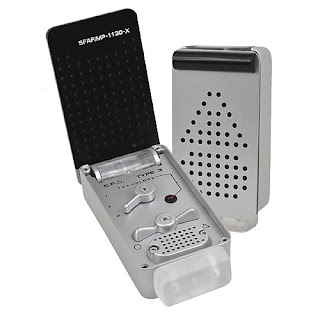 Another one for your Away Team kit from Diamond Select Toys is on the way. After the successful ST TMP and TWOK Phasers from DST in 2009, this replica would be a great addition to any Trekkers’ collection.
The DST Star Trek II: The Wrath of Khan Communicator was announced to be scheduled in November 2010 on Entertainmentearth.com with a price tag of USD37.99 and now open for pre-order. Item described as coming with lights and monologue from the movie. 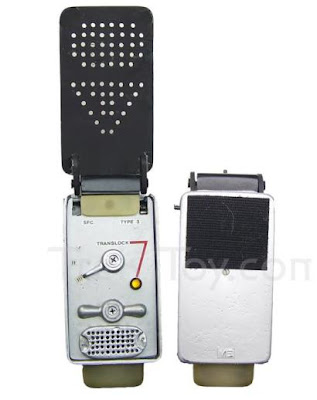 The original prop was designed and made by Marco Enterprises for Paramount Studios. The one here is probably used by some extra judging from the paintwork and quality (these days, we call the close-up prop the “hero version”). Notice the velcro patch on the rear to secure the Communicator on a Starfleet officer’s field jacket.

The original prop was designed and made by Marco Enterprises for Paramount Studios. The one here is probably used by some extra judging from the paintwork and quality (these days, we call the close-up prop the “hero version”). Notice the velcro patch on the rear to secure the Communicator on a Starfleet officer’s field jacket. 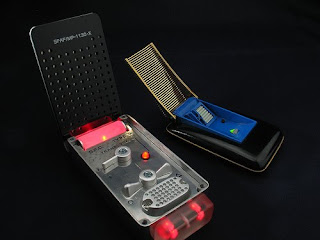 Seen here side-by-side with a STIII: TSFS Communicator, the TWOK Communicator is a departure from the sleeker predecessor (TOS) and successor (STIII). The prop in the picture above seems to emanate red lights as opposed to white in the movie. The maker’s preference I suppose. The communicator is significantly larger, especially when you see Kristie Alley holding it up in the Genesis Cave scene!

From previous experience with DST’s track record, putting a pre-order in now would mean another 3-4 months after target release date before the Communicator would actually be released. If so, hopefully it would coincide with the tentative release of DST’s USS Excelsior NCC 2000 and USS Enterprise NCC 1701-B in 2011. 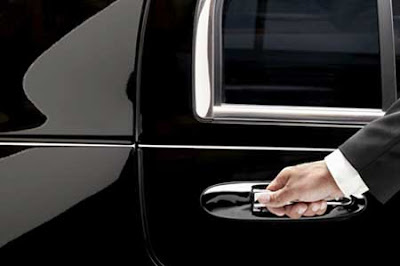 I think chauffeurs are as much connected to their bosses as ink is to paper.

Be it a status symbol, a position of necessity or simply a confidant on the move, your driver is very much the only person around you in that peak hour jam or that morning drive to work. He knows your routine and is sometimes, if not most of the time, privy to your conversations and deals. The only think you have is his implied trust to keep mum and your trust in him to take you home to wherever and then home again.

I took some time this evening to have a cuppa and ran into my colleague's driver sitting under the tea shack behind the office. I struck a topic about his former "drivees". He had so many who's commuted under his care, some nasty than nice and some who are mindlessly petty about going through potholes in the heart of PJ Old Town! From female executives who pays no attention to his driving mannerisms to their secretaries who think they now more than he does, respect for the man starts to grow as I realized how much he has to put up with.

A trusted chauffeur could be seen ferrying the family and wife, help run errands, even sometimes being entrusted with dispatch of sensitive material. Sometimes, the driver is the confidant you thought you never could have.

In Malaysia, most drivers are paid a 'minimum wage' somewhat with them tallying their monthly expenses with overtime claims and extras. It's appalling that some tears through the city in wanton recklessness when left alone with their employer's car, but apart from the few proverbial rotten apples I've learned that taking the wheel for someone entails a monumental humility and needing to engender the trust of his master.

So, today, I look up to the person who steps out to grab that door handle and asks "where to sir?" 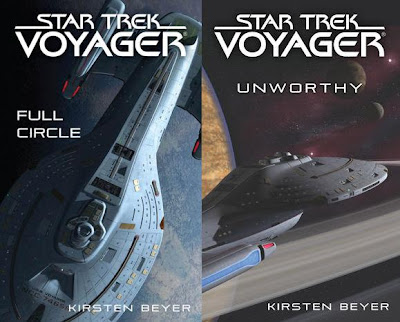 For Trekkers who wanted more from the legendary crew of USS Voyager, these two books are the perfect read: Full Circle and Unworthy.

The continuing encounters of Captain Kathryn Janeway, Chakotay and Seven of Nine will spurn interests which was once since the tv series which saw its last season finale in 2001. The timeline :places the characters about two years after Voyager's return from the Delta Quadrant. The story unfolds when the vaunted vessel , now equipped with the new slipstream drive and a few augmentations is assigned to return to the Delta Quadrant supposedly for a recon mission to ascertain the balance of power after the massive defeat of the Borg but as the story unravels, you'd see that the storytelling sets out whole new possibilities in the Voyager franchise. And you'd think you saw the end of it when the future Admiral Janeway helps her younger self and the valiant crew get back home.

Kirsten Beyer is a brilliant writer.

Her writing grips the reader with her understanding of the characters and she interpolates the canon sources with her stories with remarkable outcome. The books left sanguine expectations. It was hard to put them down once I started.

Beyer is working on an unannounced Voyager novel scheduled for release in 2011. I am looking so very forward.